California Legal Window Tint Laws for  2021-2022 (As Stated Here on Californial’s Government Website)
Why was it enacted back in 1999? Californians were tinting the windows in their vehicles long before 1999.

If we just think about this issue from a different perspective than the driver, maybe we can make some sense of why so many people, (Especially those ticketed), in southern California can get STEAMING mad at the mention of California’s Legal Window Tint Law . . . and why maybe they shouldn’t.

What matters the most:
How Well You Can See Looking Out? 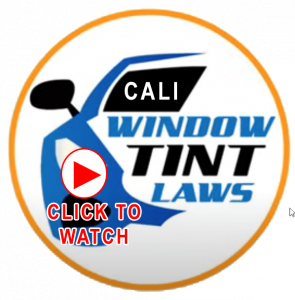 Or How Well Someone Else Can See Looking In?
Especially Law Enforcement Officers

When you look at it from the driver’s perspective in southern California, that blistering hot summer sun is shining straight through their car windows and cooking them, a person has to wonder; “Who in their right mind would not want to block out as much of this hot sun as possible”? RIGHT?

After All, there is the Glare factor:

Sunlight reflecting off the (Maybe tinted) window of another car through your un-tinted windows and causing near temporary blindness just as a child chases a ball out into the street right in front of you. So tinted windows are safer in that scenario; right? And as long as they are not tinted too dark (Limo Dark), most people think they can see well enough to drive safely with tinted windows even at night.
The Cooling Factor: The cooler you can keep the inside of your vehicle while it’s not being driven, the less work that gas guzzling air conditioning compressor will have to do to cool it back down to less than heat stroke temperatures.YAY for Window Tint.

More appealing to the younger set but let’s face it – tinted windows do look cool. Maybe it is the mystery it invokes from not being able to be seen by others looking in at you. But it is that very mystery that sends us to consider another perspective entirelyon Window Tint.

It’s night time and dark. An officer sees a car with a tail light out and pulls the driver over having no idea the guy had just robbed a liquor store. The officer approaches the car and the driver’s side front Window tint is at 5% and you can see from the percentage chart above, that would be dark enough that the officer cannot see in the vehicle.

Without the officer being able to see or barely see in the vehicle, she/he does not see the driver pull a gun from under the seat. The officer taps on the tinted window, the driver opens the window, and the driver shoots the officer in the face at near point blank range. Do you think maybe that officer should have had the right to be able to see into that car without having to have the window rolled down?

Now think about how nervous it can make an officer to come up to a car with darker Window tint at night. I don’t know about you, but if someone is approaching me with a loaded weapon at their side, I would like very much for them to be as calm as possible.

It only took that happening 2 times in 1998 for the California Tint Law to be enacted in 1999.

That was two times too many.
Regardless of what you think of our Local Police Officers, Sheriffs and Highway Patrol – we NEED them to protect the public. And we need to be thankful our state can still afford to keep on the few we have left.
So can you get your front side windows tinted so they allow less than 70% of the light in? Yep you sure can. But you can get a ticket for it. Sure it’s just a fixit ticket and you get the tinting removed, pay your little fine and so what? You got away with whatever amount of time you did without getting busted and you felt cooler and your car definitely looked cooler.

I do think you might want to hope when you get your Illegal Window Tint ticket, it is at least during the day and your windows are not tinted so dark the officer can’t see inside. But if they are you might say a little prayer that the officer is nice and calm and isn’t dealing personally with anything that will cause him or her to be the least bit on edge. Oh and by the way, keep your hands where they can be seen. On the steering wheel works.

HOW DARK CAN WINDOW TINT BE IN CALIFORNIA?

Darkness of tint is measured by Visible Light
Transmission percentage (VLT%). In California, this percentage refers to
percentage of visible light allowed in through the combination of film
and the window.

HOW REFLECTIVE CAN THE TINT BE IN CALIFORNIA?

OTHER CALIFORNIA RULES AND REGULATIONS

Restricted Colors The tint color(s) of RED AMBER BLUE are not legal by state law.
Side Mirrors Dual side mirrors are required if back window is tinted.
Certificate Requirements Manufacturers of film do NOT need to certify the film they sell in the state.
Sticker Requirements No sticker to identify legal tinting is required.
Medical Exemption State law does NOT allow medical exemptions that would allow you use special tint.
So let’s look at things from different perspectives, angles or attitudes if you will and consider the bigger picture regarding how with car window tinting, there is a reason less can mean more.
Let’s be safe out there.

About the Author: Kevin Linehan